It is a Neuromuscular Autoimmune disease.  Let’s break that down: 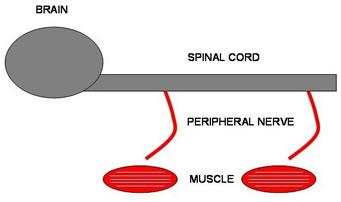 A chemical messenger called acetylcholine (pronounced ah-See-tul-KO-leen) bridges this gap. This messenger is released from the end of the nerve, flows across the gap and fixes itself to a specific receptor (acetylcholine receptor) on the muscle. The acetylcholine attaches to the receptor (like a key fitting a lock) and triggers a signal, which causes the muscle to contract. 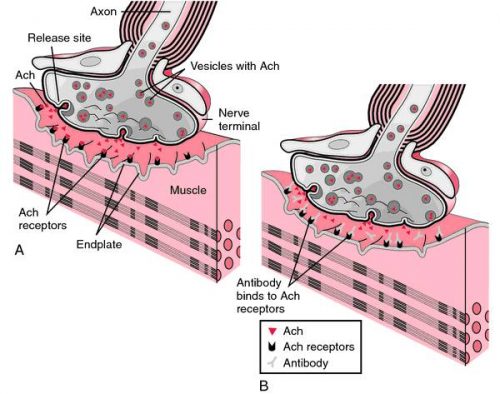 There are two types of Canine Myasthenia Gravis:

In this condition, the patient is born without normal neuromuscular junctions to striated muscles. There is no effective treatment.  Myasthenia Gravis has been described as a recessive genetic disease in Jack Russell Terriers, Springer Spaniels, and Smooth Fox Terriers.  The Miniature Dachshund gets a congenital form that actually resolves with age.

This is a so-called autoimmune disease, meaning that the immune system is destroying neuromuscular junctions as if they were foreign invaders. What muscles are affected depend on which junctions have been destroyed.  Therapy centers on stopping this immune reaction and prolonging what acetylcholine activity is still present.  This is done with a combination of immunosuppressive agents and medication to inhibit acetylcholinesterase.

Acquired Myasthenia Gravis can be further divided into three categories:

Group 1:  Mild or Focal MG – only one body part, usually the esophagus, is involved. 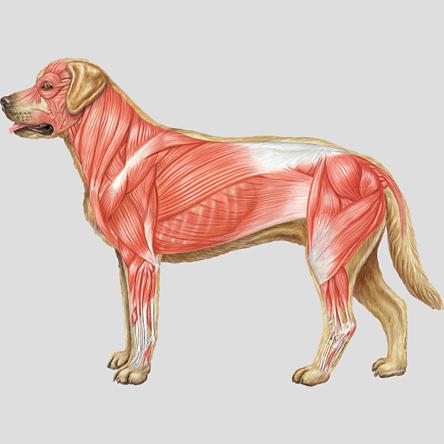 MG affects the striated voluntary skeletal muscles of a dog.  Take a look at the illustration above; notice the heavy concentration of muscles in the neck area and hind quarters.  This is why 90% of dogs with MG also have Megaesophagus.  It is the reason why hind leg weakness is also a tell tale sign of MG.

Symptoms can vary from dog to dog.  A dog may have one symptom or many.

If Congenital Myasthenia Gravis is suspected, it is recommended that your veterinarian contact Dr. Diane Shelton directly through the website Comparative Neuromuscular Laboratory @ http://vetneuromuscular.ucsd.edu/index.html  A muscle biopsy will need to be sent.  Congenital MG cannot be detected by blood test.

For Acquired Myasthenia Gravis, a blood test can be done to check for antibodies against acetylcholine receptors.  It is called an AChR test.  This blood test is able to detect 98% of pets with myasthenia gravis.  When antibodies drop to less than 0.6 nmol/L, clinical signs generally resolve.

Serum should be collected before corticosteroid therapy is initiated because immunosuppressive doses of corticosteroids for longer than 7-10 days lower antibody concentrations.

Seronegative myasthenia occurs in approximately 2% of dogs. The percentage of positive tests in the focal form of MG may be slightly less, but currently there is no other way to diagnose the form of MG.  If the vet strongly suspects MG and antibody test is negative, the positive clinical findings probably should take precedence over negative confirmatory test and a diagnosis of possible MG should be made and treatment should be started.  If clinical signs were recent in onset, retesting in 1-2 weeks may confirm the diagnosis.

The test is available through one lab, Comparative Neuromuscular Lab at the University of California, San Diego, in LaJolla, CA.  The test takes between 5-7 business days to perform after it is received.

This test involves giving an injection of edrophonium chloride (brand name Tensilon) intravenously to a patient suspected of having myasthenia gravis.  Edrophonium chloride is a short-acting anticholinesterase. This allows acetylcholine to accumulate in the neuromuscular junction, strengthening the message from nerve to muscle.  A dramatic increase in muscle strength following the IV injection should give a presumptive diagnosis of acquired MG while waiting for the results of the AChR antibody titer test. Treatment could be initiated based on the results of the dramatic positive test. Unfortunately, not all dogs are responsive to Tensilon, and dogs with other neuromuscular diseases may show a subjective positive response.

A chest radiograph set should be taken to check for thymoma. A thymoma is a tumor on the thymus gland. Surgery to remove the tumor is sometimes recommended for patients who have thymic masses so it is important to identify these patients. Thymoma may be associated with an acute, fulminating MG.  Thymoma is much more prevalent in cats. In dogs, only around 3-4% of patients will fit this category. 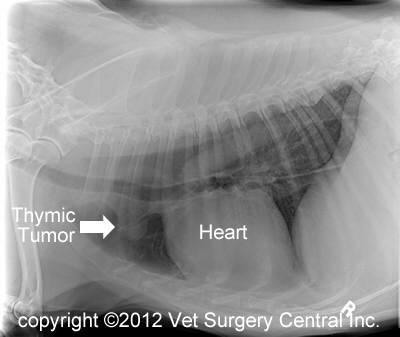 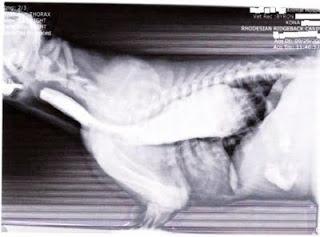 Another reason to take a chest radiograph is to look for megaesophagus and aspiration pneumonia.

Pyridostigmine  is the typical medication used to prolong the action of acetylcholine.  Neostigmine  is also sometimes used although Pyridostigmine is preferred for fewer side effects.  By inactivating acetylcholinesterase, the receptors that have not been destroyed by the immune system can bind acetylcholine longer.   It is typically given orally 2 to 3 times daily with food.  The syrup form should be diluted with equal parts water.  It comes in syrup, tablet and time span forms.  Close supervision with your veterinarian is advised in regards to dosing these drugs.  If patient exhibits signs of worsening weakness, vomiting, cramping, diarrhea, tearing or drooling the vet should be notified immediately.  Many canine patients will require no further treatment beyond this medication.

Sometimes corticosteroids, immune-suppression drugs, like prednisone, azathioprine, mycophenolate mofetil, and cyclosporine may be used if clinical signs of MG are not completely relieved with anticholinesterase drugs. Prednisone is a synthetic drug taken by mouth that resembles natural hormones produced by the cortex of adrenal glands.  The body depends on these hormones, called corticosteroids, during stress. Prednisone has a great many potential undesirable effects in dogs including suppression of adrenal gland functions, marked muscle weakness, and muscle atrophy.

Unique to MG is the possibility of increasing weakness during the first two weeks of prednisone therapy.  This necessitates close medical supervision when prednisone is instituted, either on an outpatient or in-hospital basis. Azathioprine also may be of use in canine MG but side-effects require frequent monitoring of blood counts to detect rapid drops in the number of white and red cells in the blood, and periodic liver function tests to detect potential toxicity to the liver.

Medications can be complicated and must be monitored closely by you and your veterinary care professional.

Here’s the really, really good news! Unlike humans, canines can actually go throughspontaneous remission sometimes as early as four months after first clinical signs. The average time for remission is 6-8 months, with some dogs taking over a year to go into remission.  Many times the megaesophagus resolves as well.

Prognosis is good!  As long as the symptoms of megaesophagus are well managed to lessen the danger of aspiration pneumonia, your pup has a good chance of kicking this thing!